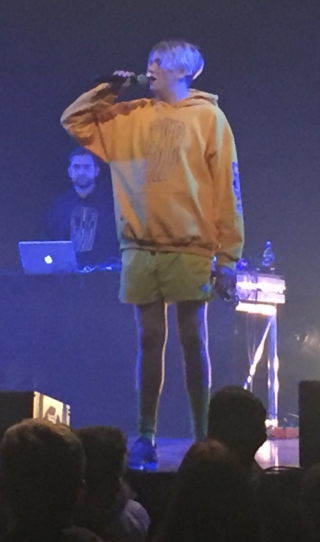 I have really enjoyed GKR at the last two Airwaves and I'm certainly looking forward to catching his shows again this year. But before that, those of us in London have the chance to see him on Thursday this week when he plays as part of the always excellent JaJaJa night at The Lexington.

GKR is an excellent Iceandic-language rapper with bags and bags of on-stage passion, charisma and damned infectious bounciness. Oh, and some pretty bright clothing too. It's pretty hard to imagine not enjoying seeing him play - last year, at his biggest show, in Harpa there was a roomfull of beaming faces with eyes fixed on this young kid on stage in bright yellow shorts and t-shirt. During his young career he's won accolades at home and got great attention abroad.

I spoke to him 2 years ago, but now with two days to go until his debut London show, and a week and a day until Iceland Airwaves 2017, it was time for a second chat with Gaukur.

Hello again Gaukur! Where are you and what are you doing?
I'm at home laying in bed watching TED talks.
Before we talk Airwaves, let's talk about London. Excitingly, you are playing here in a couple of weeks. Have you played here before?
Never played here before! Super excited.
Are you just coming over for that one show? Or are there other plans?
Yes one show, a photo-shoot and hopefully meet some good people.
Then you go back to Iceland for Airwaves. You've got three official shows, one in the Art Museum with a big line-up of local hip-hop - that's such a huge scene now, even bigger than a couple of years ago. Is it hard to find a place in there?
No not really that hard to find your place, Iceland is small, do something good and everyone knows. But I really don't relate as much to the scene as I'd like, unfortunately.
Your other two shows are in much smaller venues. Which kind of gig do you prefer?
The smaller ones are better unless you have the BEST spot on the big venues.
Are we going to hear any new stuff from you in London or at Airwaves?
Yes, of course! Always got something new.
Last question - what are you most excited to see at Airwaves this year?
Mura Masa.
---
So there you have it!
Wednesday November 1st, 7:00pm at Bíó Paradís
Thursday November 2nd, 4:00pm at Bryggjan Brugghús
Thursday November 2nd, 7:40pm at Reykjavík Art Museum
Friday November 3rd, 10:00pm at Pósthúsbarinn, *Akureyri
Saturday November 4th, 3:00pm at American Bar
Saturday November 4th, 7:15pm at Viking Brewery