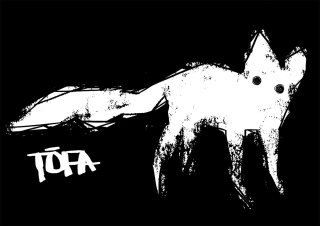 Art-punk band Tófa will be a new name to a lot of people at Iceland Airwaves this year. They actually unleashed their debut record 'Fleetwood Max' right in the middle of last year's festival. That got a lot of very nice reviews, and the band will be releasing their second collection any day now. Tófa includes members of both Rökkurró and For A Minor Refection, but sound not a lot like either of those more familiar bands, and it seems that's a lot of fun for all concerned in this arty punky party. I had a chat with guitarist Kjartan...

Hello, where are you right now, and what are you doing?

At the moment we’re all kind of scattered around the world. I’m in Den Haag in The Netherlands studying, Jói is in Copenhagen, Denmark and the rest of the gang is in Reykjavík, Iceland. We just do a lot of work through das interwebs, so we could really all be in a separate country and it wouldn’t matter that much.

You will be a new name to a lot of the Airwaves crowd. Who is in the band, and what other bands do you all play with?

Yes indeed we will be a new name to the huge list of bands playing this year. The band consists of Allie who provides vocals, Árni who plays baritone guitar, Andri plays bass, Jói drums and I play guitar. Árni is in another band called Rökkurró, Andri and I are in a band called For a Minor Reflection. Jói is the former drummer in For a Minor Reflection, Árni has played with For a Minor Reflection and I think all of us have played with Rökkurró. So it’s a small circle of nice people helping each other out. That’s how Tófa really was formed to begin with. Árni, Jói and I were kind of just jammin’ some music that was completely different from what we had been doing before. Then one by one Allie and Andri joined in and then… Party!

You say you are inspired by 20th century literature (I work in publishing, so I love to hear this!). What kind of literature in particular, and how does that influence manifest itself in what we hear in your music?

Well… I’m not the literature geek in the group - we have two men who have a Bachelors degree and a Masters degree in literature, so I’m fine with just focusing on the music part of Tófa. But Jói and Allie write all the lyrics. Some of them are based on some short stories or poems by Jói, some are fresh of the cow - something that fits the mood of the song. We even have one song on our upcoming album that consists of words by Allen Ginsberg. We’re really proud of our lyrics. They go all over the place and we have so much of material to choose from - eventually it’s up to Allie to choose which lyrics she likes to sing over each tune. Some are in English, others in Icelandic. So really the lyrics are poems rather than ‘song lyrics’, however you want to interpret that and there are some songs we’ve done where there’s no real singing, but instead Allie reciting some words over feed-backing guitars etc.

I'm listening to your excellent record, Fleetwood Max, right now. It has a lot of energy, do you manage to recreate that on stage?

I’m positive we deliver that same energy, and even more on stage. That’s kind of how we do things. I think it’s so boring to go to a studio, play by a click track and then have everything sounding super ‘great’ and modern. How we do it is that we use very few mics, let the amps face back to back so they don’t bleed too much - but some - and then we just press record and start playing with everything in the same room. That way we can kind of get the energy in the room on to tape (computer). Some bands are great in the studio, but we are at our best on stage and having fun!

I know you have a link to the American band, Perfect Pussy. That's pretty cool, how did that come about?

Perfect Pussy are so fucking great - they’re one of the reasons why we wanted to make music like this. If I recall correctly, Gauji - Allie’s husband, tweeted our album to Meredith Graves from Perfect Pussy and she really liked it and came in contact with us after that.

Have you checked out the Airwaves schedule, what are you really excited about seeing?

The schedule this year is ballin’! I’m super stoked to see Warpaint and PJ Harvey.

Finally, can you give a piece of advice to people visiting Iceland and Airwaves for the first time please?

First of all… Bring your warmest clothes. It’s gonna be cold as fuck waiting in the queue for (what it seems) a long time. Buy alcohol in the Duty Free - the beer in Iceland is way too expensive. Don’t go to the Blue Lagoon - it’s filthy. Have a hot dog at Bæjarins Beztu.

All of this is, I guarantee, excellent advice. Listen to Kjartan folks.

And guess what lucky people, there are many chances to see Tófa at Iceland Airwaves 2016. Here's the list...