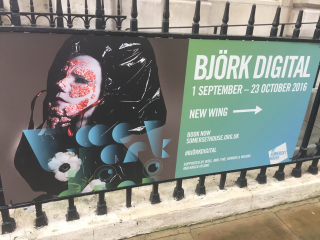 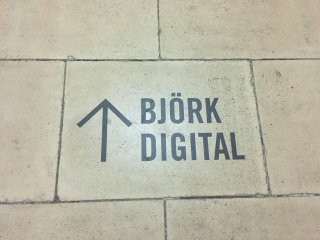 It’s been a very Björky week, which is not a bad way for a week to be. On Monday I went to the Björk Digital exhibition currently at Somerset House in London, and then last night I was lucky enough to go to her show at the Royal Albert Hall.

First, the exhibition. You go around this in groups of about 20. There are essentially five rooms, each containing a song. Your group experience each song together. First is a room with two large screens on either side, impossible to see both at once, and about 30 or so speakers. In here, the song is Black Lake. There are similar, but not identical videos to the song on each screen. I enjoy it, the song is great, the sound is as clear as can be and the video is Björk traipsing around a (presumably Icelandic) cave.

The following four rooms are all virtual reality experiences, and this was my first time with VR (as I call it, now we’re familiar). The result of that was mostly that I found myself concentrating on the ‘wow’ of VR technology and not so much on the music or specifics of what I was watching. That, and the fact that I would occasionally bang into other people, also immersed in a VR world - it takes some getting used to. That said, the Stonemilker experience – surrounded by several singing Björks on a beach – was fabulously enjoyable. Best of all was Notget, the last room, where an initially smaller than life-size, robotic rendering of Björk slowly grew throughout the track until she was there, right next to you, and at least twice as high. It was quite something.

There were other rooms with some instruments from the Biophilia shows, and the app that accompanied that album. There was a shop selling various merchandise – mainly CDs and vinyl – and a video screening room showing endless videos from throughout her career. Most welcome of all was the chance to see the fabulous Bachelorette video for the first time in years. 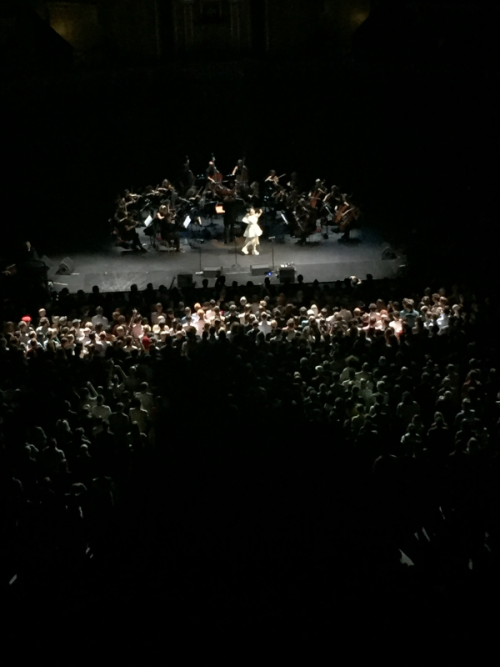 And then last night. Björk in the Royal Albert Hall, with only strings (about 24 people’s worth of strings) for company. It was every bit as incredible as that sounds. A venue so utterly perfect for her unique voice and the brilliant arrangements of songs from her latest album, Vulnicura, and some older material rearranged. It was an odd experience, somehow simultaneously incredibly relaxing (melody, strings) and disturbing (the lyrical content of her recent album performed with huge emotion).

The stage set was simple – the singer surrounded by a two-deep semi-circle of strings – and the costumes were predictably fabulous. There was the luminous headdress of part one, which was followed by the (and we all agreed on this) lit-up jellyfish costume complete with dangling tentacles for part two.

The first half was all from Vulnicura (fabulous versions especially of Notget and Stonemilker). After a brief interval came some older stuff. Some very familiar tracks, such as an amazing Joga and Pagan Poetry, (during which my favourite moment of the night came when the audience became the backing vocalists delivering the "she loves him" of the recorded version, and she couldn’t help a smile turning into a good few audible laughs) and some surprises such as ‘I’ve Seen It All’ from Selma Songs, and an outing for 'Anchor Song’ from Debut.

After Björk and the orchestra left the stage after the two song encore, the show was clearly over but the audience made a noise so incredible (don’t just take my word for it) that our hero was compelled to return to the stage just to say thank you again – it was somehow incredibly touching, and as perfect as the week of Björkness.

I've Seen It All