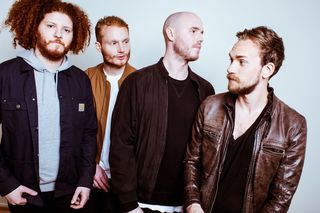 “If Agent Fresco can burst out from the confines of their home-country, there’s no reason why the band couldn’t fill stadiums the world over.”

That’s from Echoes and Dust, who don’t have a bad record at spotting a bit of talent or two. Even after one album Agent Fresco ranked pretty high up on the list of Icelandic bands who might just be the next one to break out on a much larger scale. Now, with the follow-up record unleashed and basically drowning in 10/10 scores, that possibility must be increasing.

Agent Fresco has been an Airwaves mainstay for 5 or 6 years now, they always attract a big local crowd and a curious and fast won over, international one. The majority of their reviews come from Kerrang, Metal Hammer and that type of magazine but this is another Icelandic band that joyfully defies being easily allocated to a genre. All that, and yet somehow, this is their long overdue iceblah debut...

Hi Tóti, nice to talk to you! Where are you and what are you doing?

We’re in Reykjavík and currently getting ready for the European tour in November and December as well as preparing for Iceland Airwaves. We’re doing an acoustic set for the first time in a while with a string quartet so we’re working on arrangements for acoustic versions of the songs from Destrier that we haven’t done.

You’ve just launched your new record ‘Destrier’ to another truckload of magnificent reviews. Do you think it’s your best record yet?

Well it’s only our second album and we’re certainly very proud of it. It took way more time in the making than we anticipated but we couldn’t be prouder of the outcome. So yeah, the best one yet!

What can you tell me about the song ‘Wait For Me’, I think it’s my favourite on the record.

“Wait For Me” was written in my old apartment. I had some broken drum cymbals and percussion stuff laying around that I had been collecting for a while and thought to myself that it was time to put that to use. So I made the percussion parts in my bedroom, printed it to an old tape machine I have and it stuck all the way to the album. Sometimes it’s very hard to reproduce something that happens while writing. But the beauty of modern day recording is that you can capture it in quality that is very acceptable. Regarding the lyrics, Arnór is writing about him moving to Iceland and having seen peoples live moving on where he grew up in Denmark.

Do you guys have a favourite song to play live?

Favourite songs to play live change very often. We have to play a new song about 10 time live before the song really starts to feel comfortable and it’s been like that with every song. My personal favourite song to play live is at the moment “Howls”. Very energetic and uplifting and it’s one of my favourites from Destrier.

How was the release show in Harpa? It looked amazing.

Yes, it was amazing. I’ve never put so much time and effort into the arrangements for one concert and I was a nerve wreck before the show but I couldn’t be happier with the results. We had a lot of people playing with us for a total of 15 on stage including a string quartet and a brass section to make sure we could reproduce all aspects of “Destrier”. I hope we can do this kind of production outside of Iceland one day.

As far as I know, you are playing three shows at Iceland Airwaves this year, all probably pretty different. You headline in Harpa Silfurberg on the first night, then play in the church on the second night and finally out of town at the big party on Sunday night. Are you looking forward to three different types of show?

Yes very much. They are, like you said, very different and we’re going to approach them a bit differently without saying to much right now!

Do schedule yourself but not too much. My most memorable moments on Iceland Airwaves have been in very small venues after hearing something interesting in the distance and following the sound. The tourists I meet usually know more about Iceland than me, which is a bit awkward, so don’t count on me but do go swimming! We have the best pools!

There are plenty of chances to catch Agent Fresco at Iceland Airwaves 2015. But beware, they are a popular bunch, the lines are always long: