Iceland Airwaves 2015. I got to (not) see all the cool bands 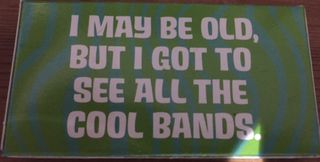 Every year, the week after Iceland Airwaves is full of the obvious great memories, the impossibility of getting that song out of my head (this year - Sin Fang's "Walk With You") and impatience to do it all over again a year on, but it is also full of regrets. Come on, there were something like 300 bands playing in Reykjavík a week ago – a lot of them very, very good bands.

It’s not fair. I can’t possibly see them all. At various points on Friday and Saturday evenings there were 14 different shows going on, and that’s just the official evening programme. I can’t imagine how many simultaneous shows were happening all at once during the off-venue peaks in bars, hotel receptions, bookstores, coffee shops and street corners around town.

It’s a fact of Airwaves that you will always be missing far more than you will see. There are regrets around the established favourites I didn’t catch this year, that list includes Retro Stefson, Sóley, Gus Gus, Hjaltalín, Oyama and FM Belfast. There are regrets about the buzzy new stuff that I never saw or heard, like Gangly, BC Camplight and Royal. Then there are those shows that I’ve heard people say were unmissable (guess what, I missed them) like Kiasmos, Mr. Silla, H09909, Agent Fresco, Bo Ningen and Dream Wife. Finally, it sounds like the big international acts all delivered great sets, but I didn’t see Mercury Rev or Beach House, I didn’t see Hot Chip or Ariel Pink and I didn’t even see John Grant’s show with the orchestra.

That’s a whole load of good stuff that I didn’t see. Luckily what I did see at Iceland Airwaves 2015 was, the vast majority of it at least, very good indeed. I saw 52 shows in total and I was home by the time the Sunday stuff kicked off. I saw one bout of northern lights, on the first night this year as opposed to the last night in 2014. There were burgers, hot dogs, incredible fish soup and that magnificent Christmas beer. I’ll be back here very soon offering a list of highlights, of which there were many – I was aiming for a top 10, but I feel like it might be 12 by the time I’m finished.