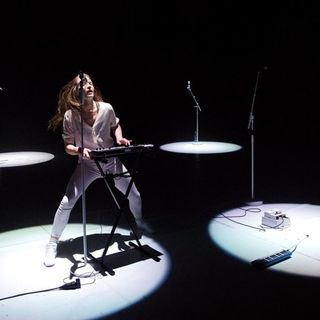 Yes, I admit it. Even before I knew anything about Milkywhale, or heard any of their music, I was interested. It’s (another) one of those names that Iceland airwaves throws out every year that makes you want to find out more. It turns out that there’s a lot to like here. If you’ve ever wondered what you’d get if you mixed FM Belfast with a trained choreographer then you really are in for a treat.

I’ll be equally fascinated to see how this turns out on the big stage of Harpa and the, well, slightly less big stage of Hlemmur bus station during Airwaves week. I spoke to singer Melkorka (are you working the name out yet?) about all of this...

Hello Milkywhale, where are you and what are you doing?

Hi there! Right now I'm at home celebrating that I just finished a six weeks intense course at the Icelandic University, hallelujah - my weekends are back!

And how on earth did you come up with such an excellent name?

Well, I studied dance and choreography in Amsterdam and Brussels. People had such a difficult time learning how to pronounce my name, Melkorka, so I found out this way of explaining it to them. I said "It's like milk in Dutch and orca which is the Latin word for killer whale”. So I am the white milky killer whale that likes to sing pop songs.

So you are a choreographer working with Arni from FM Belfast. Sounds fascinating – how does that work on stage?

So far it has worked brilliantly. Árni is such an amazingly talented musician and we fit really well together when making music. Our basic rule is to have everything on the table in our working process so we can immediately tell each other if we don't like something. I think that is such a challenge, to be politely rude. When working together we try to make music and choreographies an equal thing. So after we've made our songs, we take them to a dance studio, play them over and over again while trying to figure out possibilities with it.

When Milkywhale performs, Árni is with the sound technician and does all his music magic from there, I have no control over anything, maybe that's why I have the need to move so much on stage - each concert is like a fitness class!

Presumably when you were training in dance you didn’t expect to end up fronting a pop band at Iceland Airwaves! How did that happen?

Wow, for me it is a dream coming true. I've been into music for so many years but never like this. I formed a performance band with some of my best friends when we were studying in Amsterdam. We were tired of moving our bodies; we wanted to move the audience instead. And when I met Árni, we shared the same vision of wanting to "choreograph" a concert. So instead of going on stage with random lights and visuals, we synchronized everything together as we wanted it to be. We're both so enthusiastic about this project. Milkywhale is different from everything we've done.

Is the whole show choreographed, or is there space in there for some improvisation?

Well, Milkywhale started out as a project at the Reykjavik Dance Festival, which we premiered last August. We like to think of that show as a database in our current concerts. So we're not bound by the structure we made, instead we take bits and pieces and give them a life of our own. Our show at Airwaves will definitely be spectacular in its own way. I like to think different with this project, a couple of weeks ago I was trying to think of ways to crowd surf in total silence and if it could work. Just imagine, it would be so great. Anyway, none of our shows are the same so let's see what happens at Airwaves. It will probably be a surprise to us as much as the audience!

You are playing on the Friday in Harpa on a nice bill headlined by Sin Fang. That seems like a good spot, are you happy with a big stage to move about on?

Absolutely! It is wonderful to play in Harpa and get a big stage. Especially since it is our first year as Milkywhale! I'm becoming pretty good in singing and dancing around small stages with drum kits while wearing high heels so everything else is just great. And we have such a great director working with us on visuals (www.magnusleifsson.com) who also did our "Birds of Paradise" music video.

So the whole show will be an intense combination of music, soundscape, dance and visuals.

What other acts are you super keen to see at Airwaves this year?

I love Beach House, I saw them at Airwaves a few years ago and I want to see them again, Sunday evening with Hot Chip and FM Belfast of course sounds great also, and if I wasn't playing myself, I would definitely go to the Hip Hop night at the Reykjavik Art Museum on Friday (we can go there all together after you've seen Milkywhale!). Actually my little sister is going to the festival for the first time this year so I think I'll let her decide which bands we'll see.

If there is a band you really want to see, go early to the venue, there is nothing more frustrating than standing outside in a line freezing meanwhile your favourite band is playing, dress well, don't get too overwhelmed, pass by Bæjarins bestu in between Harpa Concert Hall and the other venues for a hotdog, try to crowd surf or head bang at least a couple of times, sing along with your favourite songs and don't plan to much - meet new people, see Milkywhale and let the festival surprise you!

OK, these are your opportunities to catch Milkywhale performances at Iceland Airwaves 2016: