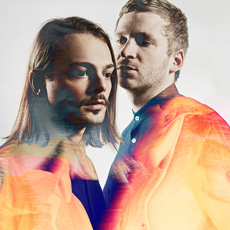 Ólafur Arnalds has provided many Airwaves highlights for me over the years, and also some stunning shows in London too. Plus, I always interview him in years which end in an even number!

So it was a bit of shock to be scanning the line-up for Iceland Airwaves 2014 and to realise that his name was absent. I mean, the guy deserves a break, he is seemingly constantly moving through airports to play shows in country after country. But, no! He will be at Airwaves this year, but this time with his band Kiasmos who have a debut album released TODAY!

Just the excuse I needed to get in touch again to find out more!

So, after constantly touring the world and writing music for TV and winning Bafta awards for it, you are playing Iceland Airwaves this year with your band Kiasmos. What is Kiasmos?

Kiasmos is mine and my friend Janus’ hobby suddenly turned serious!

And how on earth do you find the time?

I don’t sleep much.

You started making music with Janus back in 2007 I believe, are there tracks on the album (to be released just before Airwaves) that date back to those early days?

2009 actually (I think our first press release had a typo in it). The stuff we were doing back then was quite different from what you hear on the album, much less melodic and emotive. When we started work on the album we decided to start pretty much from scratch, not using any older songs, in order to create something that could really be a unified album from start to finish. Representing one moment in time rather than a collection of tracks made over some years.

Does playing in a slightly different style present any challenges? Or is it a really welcome or relaxing relief?

It’s always nice to do something different. There are new challenges but challenges are good, you learn from them.

Any thought of going back to drumming?

Not publicly no, but I jam every now and then in the studio.

I'm sure you'll get a huge crowd for your Iceland Airwaves show, what can we expect from the Kiasmos live experience?

We have created a pretty epic visual show in collaboration with Máni Sigfússon (visual artist) and Stuart Bailes (my light designer). Airwaves will be one of the first shows where we will have all of that, so we are excited!

Thank you, and good luck for the album and Airwaves. Might there be any daytime or off-venue shows you can tell us about?

We will do a KEXP thing at Kex Hostel, but that’ll be it this year for off-venue shows.

So, just to confirm those Kiasmos shows at Airwaves: