Börn are a band that I have never seen before but I am definitely looking forward to checking out. They have an excellent record “s/t” available on bandcamp. They get described with words such as loud, dark and gloomy and associated with genres like post-punk and death-rock. So you know what you’re getting, and this band comes highly recommended.  I spoke to bassist Júlíana.

Hello Júlíana! Where are you right now, and what are you doing?

Hi! Right now I'm actually in a cabin in the west part of Iceland recording some new songs for Börn's upcoming 7".

Who is in the band? And how many other bands are you, or have you bee 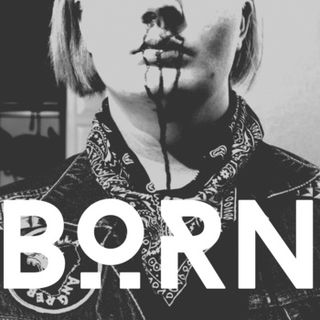 The band consists of Fannar on drums, Alexandra on vocals, Anna on guitar and me on bass. Me, Fannar and Alexandra used to be in a punk band called Tentacles of doom and Fannar has been in several other bands. I used to be in a one person band when I was a teenager and Anna has dabbled with music before but nothing serious.

So when and how did you all get together and decide to make music as a group?

Fannar and Alexandra released an Internet ep in 2010 under the name Norn. They then asked us to join them and in 2011 we released a cassette also as Norn. In 2013 we changed our name to Börn and started being more active.

Your sound is described as loud, dark and gloomy. Is that fair? And is that a genre that you think Icelanders do particularly well?

Yes I think that is quite accurate description of our sound. I don't know if Icelanders do that particularly well or not but there are several great dark bands going right now in Iceland.

And I just read that you're influenced by European post-punk and American death rock. How about you give us one band from each side of the Atlantic that's been a massive influence on you?

From Europe I would mention Vonbrigði and from America Christian Death.

What should we expect from your shows? And why should people choose it over everything else that will be going on at the same time?

Come if you like punk. Go somewhere else if you don't.

Have you had a good look at the Airwaves schedule? What else are you really excited to see?

We're excited for Kælan Mikla, Prins Póló, Saktmóðigur, Reptillicus and loads more. It will be a busy week.

Börn are playing at the following times, go if you like punk.