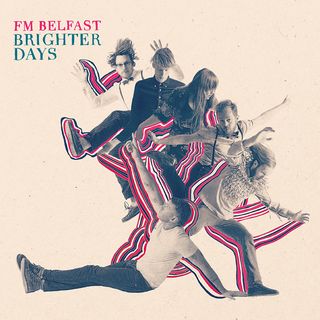 I was pretty lucky and excited to get a promo copy of the brand new FM Belfast album recently, it arrived in one of those square parcels with Icelandic postage on it that I so love to receive. This is their third album – if you discount that oddly premature but excellent ‘best of’ that turned up last summer, “The Singles Club”.

It’s a nice problem to have, but FM Belfast’s problem is that they are such a good live band that their records can seem secondary. Sure, they sound good, but what we always really, really want to know is when can we next see them play live! The shows are wonderful, euphoric, insane affairs. I remember them closing Airwaves one year (2009?) in Nasa on the Saturday night, relatively early in their life – they played an incredible set covering Guns n Roses, Technotronic, Snap (and RATM of course) along the way and then ending with an almost naked (and about 20 minute long) version of their anthem, Underwear. Then, at Airwaves 2013 in Harpa they played the best show I’ve ever seen them do – a hall full of people left delighted, grinning, covered in streamers and confetti and wishing they could dance a bit better.

The new album is a very worthy successor to How To Make Friends (2008) and Don’t Want To Sleep (2011). Right now, it’s my favourite of the three. iTunes tells me I’ve heard it 8 times in the last 3 weeks. 3 tracks will already be familiar, DeLorean and We Are Faster Than you appeared in 2012 and 2013 respectively, and then Everything was released about a month ago – all excellent additions to the FM Belfast range. Slightly unexpectedly, my favourite moments of the rest come when they slow down a bit (this only serves as a contract from where they can speed up again of course) on the really wonderful “Ears” and the closer “The End”, which sadly, is not a cover of The Doors.

This is an album to love. You should totally buy it, and then you should seek out a live show.

Brighter Days is released into the wild on April 22nd, you can order a singed pre-order copy here.