Most of this is Rúnk's fault and I love them 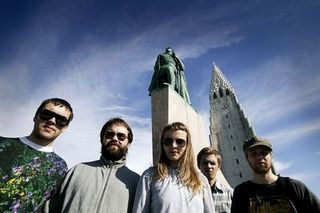 The brief version of how I came to be this "crazy foreign person who loves Icelandic music" (said the airline Iceland Express, who later disappeared) is this...

In 1987/88 I fell in love with this band called The Sugarcubes, you probably know them. Therefore when my Dad asked 14 year old me where I would like to go on holiday, I said "Iceland please". We went to Iceland and I fell in love with Iceland. You know, the bubbling mud, the elves, the glacial landscapes are all pretty enticing.

It never occurred to me for some reason that maybe there could be other bands.

I got home to London, wrote to a newspaper and asked if they would put in an advert for penfriends for me (it was 1988 remember, stop sniggering). I got a lot of post from Iceland. I stopped writing to most of them, but kept writing to one of them and still do - you can meet her, she serves the best coffee in Reykjavík in IÐA Zimsen. Eventually she started sending cassettes (look it up kids) full of Icelandic music. They were OK.

I didn't go back until 2002 I think. I still wasn't really noticing any kind of widespread musical wonderfulness beyond Bjork and her former chums. Then, Hildur took me to Grand Rokk (bless it's soul, it was a great place) to see this band called Rúnk. It was thrilling, they were wonderful, the night was an insane party that you just don't get in south west suburban London. It sounded better than anything I had heard before (if you are paying attention, you'll have realised that I was by know "of drinking age").

You may not know of Rúnk, but between them the five members have gone onto bands including Múm, Slowblow, Stórsveit Nix Noltes, Skakkamanage, Borko, FM Belfast, Benni Hemm Hemm and Prinspóló. They only made one record, it was called Ghengi Dahls and it's wonderful.

I interviewed Svavar of the band (now of Prinspóló) a couple of years back and of course couldn't resist asking about Rúnk, He seemed to suggest that some kind of a reunion could happen if enough fanta lemon was on offer. It's an in joke, you have to be waaay cool to get it, the sort of cool that had penfriends in the 80s.

Rúnk, in one night, made me an Icelandic music addict. I wanted more of this, and I found more of it, and I haven't stopped finding it since. I haven't missed an Iceland Airwaves since, and the good times have kept coming. It is all their fault and I love them.