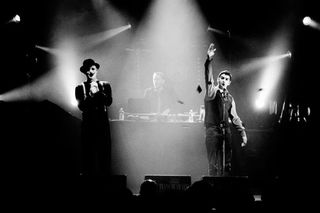 I knew very little about Epic Rain before Iceland Airwaves 2012. I had heard their 2011 E.P. A Murder Of Crows but shamefully wasn't aware that they had released the album Elegy during 2012. I caught them in Þýski barinn on the Saturday night of Airwaves (they were on just before Ghostigital) and became more and more impressed as their show progressed. Another hard to pin down Icelandic band, Epic Rain play relaxed, dark hip-hop with the lyrics well to the fore from Jóhannes plus the pretty incredible vocal talents of Bragi.

I'm pretty certain that a lot of people who caught Epic Rain at Airwaves will be keen to find out more. As always, at your service, I decided to have a little chat with main man Jóhannes Pálmason.

BREAKING THE CHAIN by EPIC RAIN

Hi, congratulations on your show at Iceland Airwaves 2012, I thought it was great - how was it for you?

It was a lot of fun, nice crowd and a really good atmosphere.

What else did you get to see during the festival that you enjoyed?

To tell you the truth, I am not really the concert type. I did check out some of my friends who were playing at the festival, Steve Sampling, Stereo Hypnosis. But actually I just stayed down at the studio and made some music.

Who is Epic Rain? How many are in the band?

Epic Rain was founded in 2010. The band consists of five members,

We also have a group of session players that contribute and help us a lot making the music.

How was the recording of the album? Just from seeing you on stage, you strike me as a perfectionist - is that true?

We recorded the album by ourselves and the process took about one year. I think that you can never be truly satisfied with the work that you do. I guess that's the point, there is always room for improvement.

It's really clear that the lyrics are very important to the band did you always intend to set your words to music?

Before I made music on a serious level I used to write short stories and poetry, words are really important to me. I think I'lll always write, even when I'll stop making music. It's something about that self examination when you sit down in a quiet room with a pen and watch the ink soak in to the paper. But music is the perfect way to make the words come to live.

Thanks for your time, and Happy Christmas, what do you hope 2013 will bring for Epic rain?

I think 2013 is going to be a really good year for us, we'll start the year of by going to the Eurosonic festival and we'll also be playing in Paris in February. There is a new EP coming out called Somber Air that will be released on vinyl which is really exciting. Also there is book coming out, a collaboration between Epic Rain and Björgvin Sigurðarson who is the director for all the Epic Rain music videos.