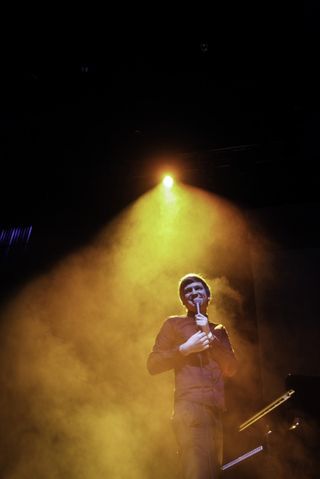 For the third year in a row, Ólafur Arnalds delivered one of my standout sets of Iceland Airwaves. I love the music, of course, but I love being in an audience stunned to open-mouthed silence, I enjoy that communal feeling. Nobody makes a sound or moves, and then at the end of each song there is a very tangible exhale before the applause begins.

In the hope that you're not all fed up of my interview 'technique', I thought I would add to my pre-Airwaves set with some carefully selected conversations with artists that I'm guessing visitors to Iceland Airwaves will now be at home wanting to know more about, and hear more from. Ólafur Arnalds is top of that list.

Which of your shows at Iceland Airwaves 2012 did you enjoy most this year, and why?

Actually the KEXP show at Kex Hostel may have been my favourite, I just didn't expect much from it and it surprised me. Very fun and lighthearted atmosphere which I often think is what goes best with my often serious music.

Do you have a favourite song to perform live?
Lag fyrir Ömmu, for sure. For some reason I manage to give myself a little goosebumps every time I play it. The silence in the room is usually so amazing in that song and we have a special little surprise at the ending of it which never gets tired.

And which other shows did you see that were great?
I didn't manage to see much actually, it was quite a busy weekend for me. But I loved Boy and Retro Stefson.

Your show for inspiredbyiceland at The Little House Of Music was great (and you played my favourite song, thank you)- how did you prepare differently and how weird was it being in that little hut?
I didn't really prepare to be honest, me and my band are pretty much ready for any situation that may come up. It was a little weird at first but not in a bad way, it was interesting definitely.

What are you working on next - might there be a new Ólafur Arnalds album next year? Or some more movie soundtrack work?
I just finished one american film score and am starting a score for a new british television series called Broadchurch. I have already finished a new album though which will be released early next year.

This is excellent news! And are you looking forward to playing Sonar in February? Will you be making any special plans for that show?
Yes! very much so. I will be playing with one of my favorite artists, Ryuichi Sakamoto (who I have previously toured with) and we will be premiering my new album material. So expect something very new and different!

Last time we spoke, you described Robyn as your future wife - how is that going?
Not very well actually, my girlfriend keeps getting in the way...

Ha Ha! Thanks for your time. I owe you a drink, what are you having?
Always whiskey. Any time of the day.

I couldn't be more delighted by the idea that Ólafur gets goosebumps on stage. To find out more and hunt for tour dates near you check out his official website here. If you've just discovered him and are on the hunt for a bargain, take a look at his projects Found Songs and Living Room Songs. I should say also that the picture above was borrowed from the Reykjavik Grapevine review pages, I'm hoping hard they forgive me, I really love the photo! 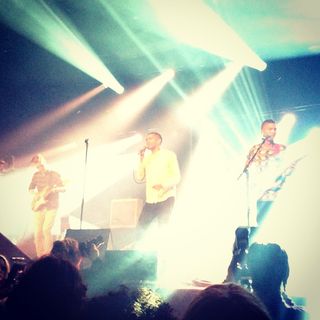 I've been back on this island, as opposed to that island, for a week now and I must confess that the thoughts of Iceland Airwaves 2012 haven't been organised into what I could call a 'review' yet. If you want a review RIGHT THIS MINUTE then I strongly suggest you take a look at what Mr Iceland Bob over at his sex farm. I'm certainly not disagreeing with his nomination of Legend, Reykjavik and Ghostigital as being amongst the many highlights.

Quick thanks too to everyone who helped organise the festival, it must have been a nightmare with the weather and the cancellations, but it was, as ever, amazing. I also know that plans for Iceland Airwaves 2013 are underway.

I'm just here to give you three things I've learned in the week since I've been away from Iceland and I'll be back soon naming the best ten things I saw and other gimmicky stuff.

1. When I asked people on twitter to name three highlights, the most commonly named things were the storm and the new song, Brennisteinn, played by Sigur Rós.

3. Hangovers are MUCH worse in London. I'm still assuming this is the sulphur shower effect.

I'll write more once I stop wading through the Little House Of Music videos over and over again. For now, here's where I was at Iceland Airwaves 2012 (unless you know better, in which case please do let me know!)