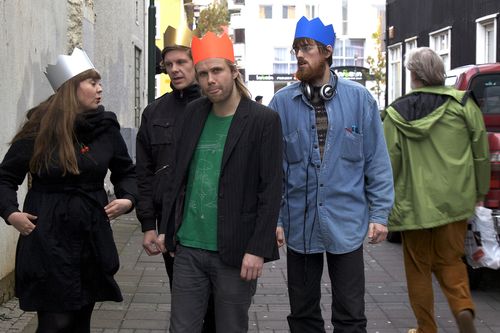 Prinspóló are one of those Icelandic supergroups where you'll recognise everyone on stage from one or more bands. This lot are led by local legend Svavar Pétur Eysteinsson, of Skakkamanage and the truly wonderful but now defunct and legendary Runk. The band includes members of FM Belfast, Reykjavik! and Sudden Weather Change. So, they're pretty good, as those credentials would suggest. I had a chat with Svavar about this and that...

Hello Svavar, where are you? What are you up to?

Hi there. I'm at my home in Reykjavik where I'm planning a road trip with Prinspóló, FM Belfast, Sin Fang and Borko. We're going to Akureyri on October 22nd on a tour we call Partíthokan (The Party Fog).

The band has been touring in Eastern Europe - was that a load of fun or are you all fed up with each other now?

We did Poland in September, with a stop in Berlin. It was awesome! Polish audience took us like royals and we had so much fun. Our love to Poland and to our selves has gained very much after the tour and now we have a plan on touring Poland every year until 2054 or something.

When Prinspóló go on tour about 4 other bands lose members! How does everyone cope with that?

Well, the Prins is always number one because we have no king.

Good answer! When you play at Airwaves there will be 5 or 6 other shows happening - so why should people come and see you play?

You should because you must. The herd must follow it's Prins.

You aften spend a lot of time clearly saying something very funny in Icelandic between songs - are we allowed to know what you are saying?

Yes of course. I really suck in English storytelling, especially when I'm about to pee in my pants with stress. And sometimes, while on stage, I feel like saying something to the audience, especially when they are smiling to me, and then something long and pointless comes out of my mouth. Usually I'm in some kind of a mental blackout because of stress and I don't know where I am or what I'm saying.

I have to take the opportunity to ask you about Rúnk - that was the band that made me realise (I think in Grand Rokk in 2002) that there was a depth to Icelandic music beyond former Sugarcubes, so thank you! - It was a great band, is there any hope of you guys getting back together again?

How nice of you to say. Well, next year is the 10th anniversary of Rúnk's one and only LP Genghi Dahls. If time and money is on our side we might have a Fanta Lemon or something.

If you get together, I'll buy the Fanta Lemon! Can I also ask about Havarí? The store closed earlier this year, but is there any news about it reappearing?

We have no plans on that, and we are all pretty busy working on even worse business models than Havarí. But you should never say never. We still have a social number for the company and some debts to pay.

Have you seen the festival line-up? What are you really excited to see?

I will probably go and see what my colleagues in Reykjavík and Sudden Weather Change are up to. Both are releasing and working on very exciting stuff. Then I might check on Borko, Beach House, Dad Rocks!, Ghostigital, John Grant, Mr. Silla, Sin Fang and Sóley and what ever knocks on my ears.

You can see Prinspóló at Tjarnarbio at 8:50 on Saturday 15th (today!) - pay your respects to the prins, and bring your party hat. You'll have no regrets.