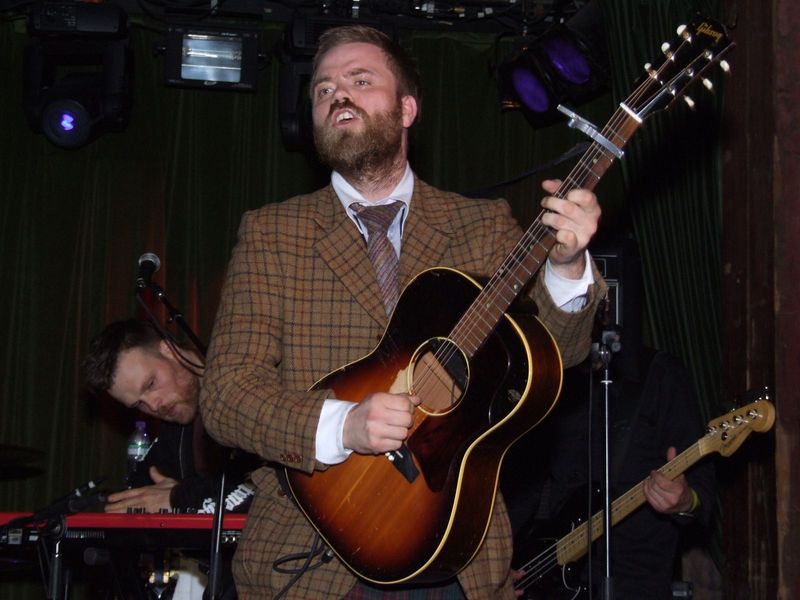 Mugison was another of my very early finds at Iceland Airwaves. I was told not to miss his show at the 2004 edition and that proved a great decision. His style has changed a lot over the years, but the inflow of awards has never stopped, from the lo-fi folk of debut, "Lonely Mountain" to the rock God stylings of "Mugiboogie" that saw him supporting Queens Of The Stone Age. Throughout, Mugison has remained a charismatic, warm and massively entertaining performer. He even runs his own annual festival with his father in his home town of Isafjordur. His show at the modestly sized venue, Idnó, is going to be very crowded indeed.

Hi Mugi, where are you right now and what are you doing?

I´m lost in transaction, in-between. Stayed up late last night - was trying to sing a ballad for a friend of mine - ballads make me drink. So now I´m just in that transaction, getting my head together again.

Will you be playing with the full band at Airwaves this year? Who is in the band?

Not sure, I know Addi (drums) and Pétur (guitar) will be there, I´m hoping I´ll do 1 or 2 songs on my new instrument... who knows I might pull together a brass band, choir, the symphony ... or I might play all by my self on the guitar, it´s Airwaves - you never know.

Your latest release was a live album of full band versions of your older songs - is your transformation to ROCK GOD permanent?

No, I´ve killed it. You might see some leftovers this year - cause my live show with my instrument is not ready - I´m still recording and developing my next album witch will be all about the new instrument.

Are you working on new material? Will you be playing any new songs?

There will be 5 or more other bands playing at the same time as you - so why should people choose your show?

I usually try to see as much as I can myself. I usually listen to 2-3 songs and then run to see something else, that way you can see nearly everything, unless it´s something really popular that year, then it´s a struggle with the queue.

You've collaborated with many of the bands playing (Hjalmar, Petur Ben, Reykjavik!) - might we find you on some other stages during the festival?

I think I´m playing with Pétur Ben, I haven't heard from the boys in Reykjavik for a while - don't know. Hjalmar - hope not, I can never remember the lyrics to that song we did, even though I wrote it.

Have you seen the festival line-up? What other bands are you excited to see?

I´m looking at the line-up right now -  I´m going to try and see everything.

You run your own festival up in Ísafjördur (Aldrei fór ég sudur) - is that a completely different experience to Iceland Airwaves?

Yes. it´s different. it´s free for everyone. bands play for 25 min. there is no sound-check (just plug and play). our festival is about love and good times - airwaves is about money and good times.

And finally, how about a few local tips for the festival first-timers?

Try to go swimming as often as possible, at least once a day. Bring your own booze (it´s expensive over here), if there are people protesting downtown - join in.
Give as much love and respect as possible and I promise you it´s gonna be the best weekend ever.

Force your way into Idnó to see Mugison strut his stuff on Friday night (OK, Saturday morning) at 1:10am - one of the most unmissable shows of the week. I promise.