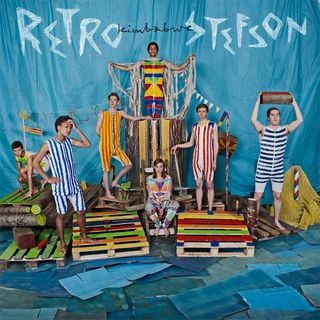 Retro Stefson are undeniably and irresistibly FUN. Ever since i first saw them several Airwaves ago, I've been getting more and more hooked on their, well, hooks. Since then they have visibly grown up before our eyes becoming increasingly confident and never losing their sense of fun. Most recently I saw them at the London Iceland Airwaves preview show in Hoxton. I wasn't surprised at just how thrilling their show was, but their was a roomful of people converted in moments. By the end of the show, the audience were putty in their hands - crouching down on the floor, leaping up, doing Mexican waves - hanging on their every word. At last year's festival, a lot of people quite rightly held up their show alongside FM Belfast as the high point of the week. There are plenty of chances to see Retro Stefson during Iceland Airwaves 2010, they have a brand new album (with fancy looking cover, right) full of songs to play for us, including the fabulous single "Kimba". So if you like a bit of indie disco with world beats and occasional heavy rock mixed with fabulous fun, grab a spot near the front.

Hi Retro Stefson! Where are you right now and what are you doing?

Heylo! We just came from a band practise so I guess everybody is at their house. I´m not sure what they´re doing but I just arrived home after a 30 min bus trip to Grafarholt, awfully tired after a long day and I think I´m just about going to bed and resting for the festival!

Who's in the band?

How was your trip to London recently? Did we dance enough for you?

It is always enjoyable to play for a new crowd. We had heard the audience can be a little difficult in the UK so we decided just to have fun and enjoy the concert. But as the concert started we realized that you can not stereotype the audience of a whole nation because after a few songs the people started to dance. So we were really happy about the concert and about our stay in London. Great city!

You have a sound that is really difficult to describe, a real melting pot - how do you describe it?

Well, I agree with you it is pretty difficult to describe. We try to mix up the genres we like and and stir it into a great cocktail. The cocktail would be a mixture of a Disco drink, Cuba Libre, Viking,  Haribo (the Karamba Coctail, our old workplace) and Fernet Branca.

Your new album, "Kimbabwe" is ready to go - how different is it to your debut?

It is a little bit darker, not emotional but a bit heavier. I think it is also groovier. But of course you have to find out yourself! 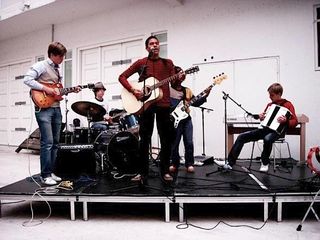 There will be 5 or more other bands playing at the same time as you at Airwaves - so why should people choose your show?

We are really looking forward to play and we´re very happy about the bands that play before us and after. I think this night is going to be a blast. People are going to be sweaty and have fun. We will guarantee that we will put all our efforts to enjoy the concert and to entertain the audience!

Have you seen the festival line-up? What other bands are you excited to see?

The line-up is amazing! The bands I don´t wanna miss are Hercules and Love affair, Bombay Bicycle Club, Amplifites and Dan Deacon. Also some icelandic bands such as Fm Belfast, Moses Hightower and our friends band Lockerbie. But if I´d have to mention all the bands we´re going to see the list would be way too long!

Do you have any tips for getting the most out of Reykjavik and Iceland Airwaves?

Try to see as many bands as you can, dress well, so you woun´t get cold (but the weather has been okay recently, so hopefully that will maintain), and don´t wake up late because there are loads of activities to do during the day such as going to the local swimming pools, going to off-venue events and walking around RVK.
---

Retro Stefson's main venue show is in Nasa at 1am on Saturday night / Sunday morning. In addition there are a few chances to catch them around town. On Wednesday (tomorrow!) they will be performing at 6pm in Hresso, and then on Friday (and I'm not quite sure how this will worK) they play at 5pm in Kormakur & Skjoldur and then at 6pm in Havari.