In Praise Of... Sudden Weather Change

They got my attention at Airwaves last year with a free CD demo (free stuff is so great). The CD was very good, but it was followed by an album in 2009 that was better than I had expected, seriously one of the best collections I've heard all year. It has the snappy title of, "Stop! Handgrenade In The Name Of Crib Death 'nderstand?", but you can call it SHIT NO CD if you like.

SO, I've tracked down the boys for an iceblah style questioning, so hit play just below, and prepare to be puzzled...

Let's start with the obvious, "Sudden Weather Change" - something to do with the unstable Icelandic climate?

OK, fair enough, so what's your favourtite weather? (these questions get better)

Probably "indian summer", where you wake up and dont expect anything good but the autumn day turns out a bright, hot one, just like in the middle of July.

And the album title... how many beers before you came up with that? Can you explain it!?

We had an English class together in college, and we were reading these articles about crib death, war, handgrenades and others that take on some of the most horrible things in life... So we ended up puzzling some of the words together and they sound really good together, mostly rhythm wise...

How did the band get together? one of you guys doesn't sound very Icelandic to me...

We were all studying art in college (back in the day) and sat at the same table during lunch breaks and discovered our similar taste and opinions about music... we started as a 11-piece noise band, but only 5 of us wanted to keep going and pay rent for rehearsal space.

What about the sound you make, I saw drownedinsound used words like fizz and fuzz to describe you last year - have you got any better descriptions? What bands influence you?

Our music is like a game of puzzle... when you have 3 guitars, a bass, a drum, and some vocals you have to work things out... and really think about each member like a unit... and when you got 5 small units, working theyre way through sound-exploration youll get a new "whole"... which is best described as a puzzle... yes, our sound is like a game of... puzzle.

Your concerts are like a party, are they all your mates down at the front with their shirts off?

It started out as a trend between some of our friends, but now everybody seems to be getting into it.

And what's wrong with Nicholas Cage? Is he so bad?

Have you seen that film... yes, the one he's in?? by the way, check this out: http://www.youtube.com/watch?v=bZhciDUvnlY

What other stuff are you listening to at the moment?

Fugazi, Flying Lotus, some reggae, Q and not U, Botnleðja (greatest icelandic band ever lived), Crystal Antlers (look forward to see them at Airwaves) and various mixdiscs with heavy some noise music. 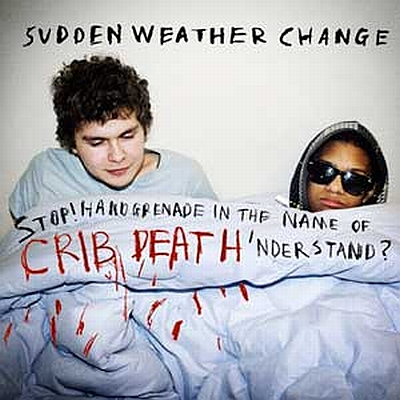 Thanks so much, where can non Icelanders get hold of the CD?

The album will be out on the 2nd of October all over Europe and for US residents it will come out on the 27th of October... but gogoyoko.com, tonlist.com also have them for sale. For further updates check out the Kimi-website!

Thanks very much for your time, see you in October at Airwaves. And so should you all...