Time to talk about Björk

It is not really possible to write for very long about Icelandic music and not write about Björk, and this week's finale to the Volta tour seems like a good prompt. I caught this tour twice in London earlier this year and was left berating myself for not going to all three of her shows. Somehow, having seen maybe 100 Icelandic bands live over the years, I had never before seen Björk in concert - although I did once see her near Green Park tube station. Exciting as that chance viewing was (genuinely, I was excited!) the 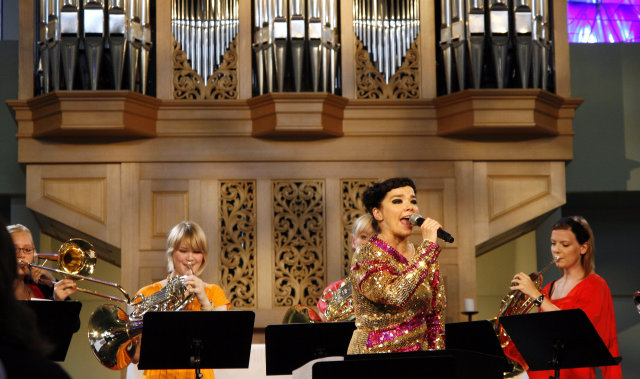 concerts were spectacular - she sure can sing and put on a show, and from the quieter intimate moments to the loud, pumping dance tunes (I can't tell you how much I love "Hyperballad") both evenings were pure pleasure. Everybody leaving those gigs had at least two things in common... A huge smile, and a lot of glitter in their hair.

So, the word finale does kind of imply something big, grand and special. Whilst this was certainly special and somewhat grand it certainly was not big. A gig for just 300 people in a church in Reykjavik was announced at very short notice in a small advert in an Icelandic newspaper. What a unique way to finish a large scale world tour and how very very Björk-like. Those 300 people were treated to a great show, you can read a good review here on the Iceland Review website. And to end with a live rendition of "It's Oh So Quiet", a song that has not featured on her setlists for years was a neat final trick. The insane jealousy is at least partly tempered by the news that the show was recorded for a dvd to be released later this year. Phew!

Another long world tour finished this week was múm's which came to an end in Norway. The good news is they are straight off to the studio to get going on a new album - good news, they've yet to deliver anything remotely duff. 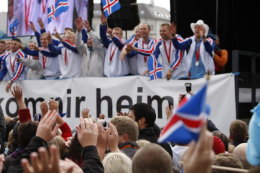 Finally, the Björk church show was not the only big event in 101 Reykjavik this week. The silver medal winning handball team got a heroes welcome (I'm assuming this, I wasn't there, but it looks like fun) on their return. Quite right too - I learned here that they are the least populated nation ever to win an Olympic medal at a team sport. Brilliant stuff.

Posted at 09:01 AM in Icelandic Music | Permalink